1. What are state corporate income taxes?

2. What is state nexus for income tax purposes?

In tax law, the word nexus is used to describe a state or location where there is a tax connection or tax presence. If you have “nexus” in a state, you have a tax presence/connection and most likely a tax obligation.  Some common situations that create nexus in a state include an office, an employee, a warehouse, or a dependent agent or affiliate.  However, these are just a few of the more common situations.  Nexus can be created in several ways and each state has its own definition of what creates nexus. Therefore, the rules for defining nexus need to be looked at on a state-by-state basis.  It is also important to remember that the rules for income tax nexus may be different than for sales tax or property tax nexus.

There has been a lot of recent legislation over the definition of state nexus.  In many states, the definition has been expanded.  If you make sales in a state, you should check to see if you have tripped an “economic” nexus threshold. Even if you have no other connection, you may still have nexus because of the number of transactions or the dollar amount of sales into the state.

3. Does my business have to pay corporate income tax in multiple states?

Most U.S. states have a corporate income tax and/or a franchise tax. Each state sets its own rules and generally tries to tax business activity that touches its state in any way. A multi-state business must apportion (or allocate) its income among the states it has “nexus”.  The business may also need to file a franchise tax return – essentially a tax for the privilege of doing business – in that state. To know what states your business is obligated to file and pay in, you need to assess state tax rules for each state in which your business has operations.  We recommend you begin by looking at the states where you have property, payroll, and sales.

4. Can I sell into different states and not be obligated for state income tax?

The Interstate Income Tax Act of 1959 allows businesses to send representatives into a state to solicit orders for goods without subjection to a net income tax. The orders must be written outside the state and the business cannot have other connections (nexus) to the state. Because this Tax Act (also known as Public Law 86-272) applies to income tax, some states have instituted a franchise tax. As stated before, franchise tax is generally thought of as a tax on the right to do business in a state.

Several states have recently adopted legislation to expand the definition of nexus. Because of this, it is important you clearly understand all economic connections to the states.  For example, if sales into a state exceed that state’s economic sales threshold, you could be a liable for income tax in that state(s) even if you have no office, employees, or other nexus.

5. I have nexus in another state for corporate income tax purposes. Can two states tax the same income?

Generally, the answer is no. Your business will most likely need to apportion or allocate its income among the states to which it has nexus. Allocation and apportionment spread the taxable income over more than one state and is intended to prevent double taxation. Each state has its own rules and apportionment methods, however. Most state apportionment methodologies link back to percentages of sales, property, rent, or payroll in the state over sales, property, rent, or payroll everywhere. Any two states do not necessarily have the same apportionment rules (nor the same rules for defining taxable income). Because of this, it is possible to have the sum of all income taxed by each state add up to more (or less) than your total taxable income at the federal level.

As mentioned above, some states impose a franchise tax (or similar) in addition to or in place of the corporate income tax.

7. Do I have to file annual state corporate income tax returns?

The answer to this question starts with the nexus question.  A company needs to identify which state(s) it has income tax nexus.  Annual state income tax returns are generally required where there is nexus.

8. Do corporate state taxes go beyond the income tax?

Most states with a corporate income tax also impose other taxes.  Other taxes could include (but are certainly not limited to) franchise taxes, payroll related taxes, property taxes, sales taxes just to name some of the more common additional taxes.  Other tax related costs could relate to interest and penalties, and a variety of other things.

Many states offer tax credits to incentivize certain types of investments and initiatives including, but not limited to, state rehab credits, investment credits, and development zone credits.

9. Part of my sales are in Texas. I hear Texas has no state income tax, but what about franchise tax?

The Texas franchise (or “margin” tax as it sometimes called) starts with the federal annual gross revenue and subtracts the greater of;

The resulting margin is then apportioned to Texas by applying the percentage of gross receipts in Texas to total receipts everywhere.  Next, the tax is determined by multiplying the tax rate by the apportioned margin. The franchise tax rate varies by industry but for 2020 and 2021 most industries are subject to a rate of  0.75%.  Qualifying wholesales and retailers may qualify for a lower 0.375% rate.

Figuring out the franchise tax can be complicated. However, there is an alternative; the E-Z Computation. This is a simplified method that allows an entity to simply multiply a different tax rate (0.331%) by the company’s apportioned gross revenue.  Note that with the E-Z Computation, none of the 4 deductions noted above apply.

Other states with franchise taxes have their own computation rules. Because a franchise tax is not an income tax, a state’s franchise tax could apply even if Public Law 86-272 bars that state’s income tax from applying.

It can be challenging to apply the rules of state corporate income taxation and determine to which states you have an obligation to file and pay taxes.  Our team can clarify the rules and help you to navigate these complexities. Fill out the contact information form and we will help to answer your concerns.

Michael specializes in meeting the tax compliance, projection and planning needs of businesses, entrepreneurs and business owners. He is Tax Partner in PW Associates, a firm which provides CFO and outsourced tax and accounting services. Michael has regional and small CPA firm experience and ran a sole practitioner tax practice for over 25 years.

This communication is provided by PW Associates, PLLC for educational and informational purposes only and is not intended, nor should it be construed as tax or legal advice.  The comments in this communication are based on our understanding of applicable rules and regulations as of October 13, 2020.

Any commentary interpreted as tax advice in this communication (including attachments and/or links) is not intended to be used, and cannot be used, for the purpose of avoiding penalties imposed on the taxpayer by any governmental taxing authority or agency. In addition, if any such commentary or advice is made available to any person or party other than the party to whom the advice was originally directed, then such commentary or advice, under IRS Circular 230, is to be considered as being delivered to support the promotion or marketing (by a person other than PW Associates, PLLC) of the transaction or matter discussed or referenced. Thus, each taxpayer should seek specific tax advice based on the taxpayer’s particular circumstances from an independent tax advisor.

How Long Should I Keep My Income Tax Returns – PWA 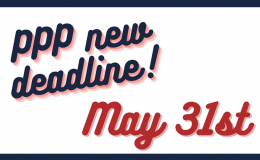 PPP Deadline Extended for Small Businesses until May 31

PPP Deadline Extended for Small Businesses until May 31